There is no doubt that VPNs have become a hot item these days and many people seem to be looking out for free VPNs. Lately, one free VPN service, Thunder VPN, has come to our attention. Branding itself as a ‘lightning fast app to provide free VPN proxy service’, Thunder VPN is available on the Google Play Store.

It claims to unlimited VPN access via many servers with a strict no-logging policy. In fact, there is no requirement even for users to register, requires no additional app permissions and works on mobile data as well. Sounds too good to be true? You might be right. Let’s look at how ThunderVPN actually compares to its claims.

1. Thunder VPN has Horribly Slow Speeds
2. Server Locations
3. Privacy Policy – Not So Private?
a. Discrepancies in the Privacy Policy
b. No company information
4. Security and Encryption – Say What?
5. Streaming and Torrenting
6. Final Thoughts: Should You try Thunder VPN?

As always when testing VPN connections, its always advisable to do a baseline check so you’ll know what your ‘raw’ speeds are at the time. For this test we used a Huawei MediaPad M5 Pro and got a baseline of around 46Mbps Down and 27Mbps Up. 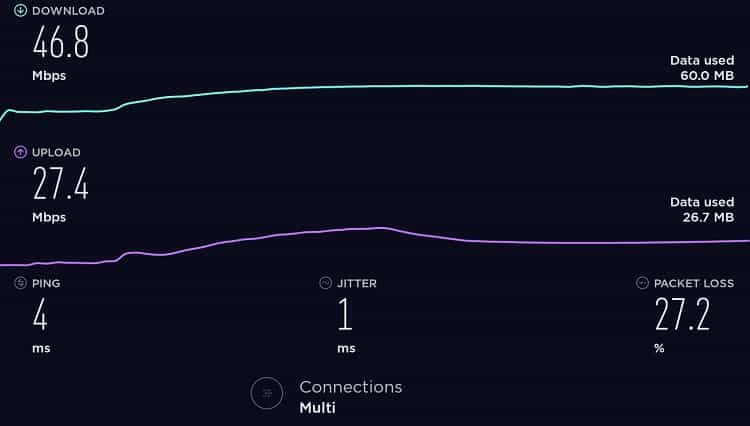 Firing up Thunder VPN, we tried to run the speed test on the default connection, which Thunder VPN claimed was the best for us. In this case, their Japan server managed to connect, but we could not do anything on that connection, not even browse.

We then switched to their France server and managed to get a connection. Thunder VPN gave us a speed of roughly 2Mbps Down and 9Mbps up. Even for a free VPN service, that’s a pretty appalling drop. 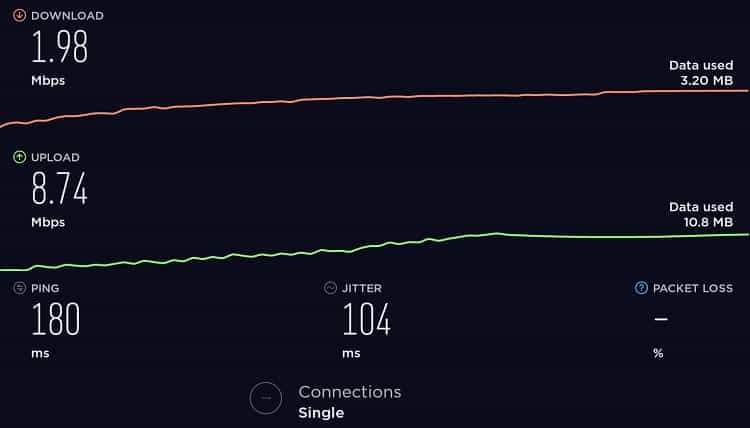 Comparatively, we ran the test on a TorGuard connection just to check if there might be something unusual happening. TorGuard was fine and managed to almost match our baseline speed at 33Mbps Down and 40Mbps Up. 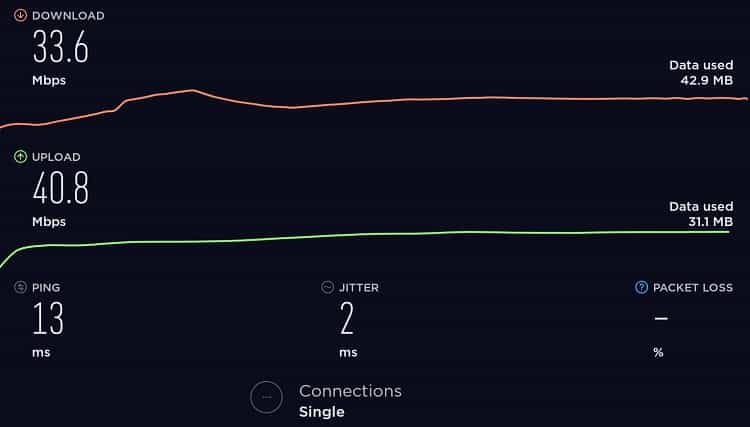 To be fair to Thunder VPN, the physical distance from a VPN server also affects VPN speeds. However, the number of servers and locations they run contrasts sharply with their claim of running many servers.

We are not impressed and think it’s likely any apps you try to run while connected to Thunder VPN are likely to give you hiccups in performance.

Thunder VPN has servers in 9 locations around the world (8, if you count the US East and West coast as one). Outside the US, the locations are all in Europe, with the single Asia location being Japan. There is no word of the number of servers it operates in these locations.

If you were to compare this with a paid VPN service – let’s take ExpressVPN for example. ExpressVPN has some great offers from time to time which brings down its price a little. Yet no matter how much you pay, you’re getting access to thousands of servers in more than 100 locations around the world.

That’s just something to think about.

Almost every single VPN service provider today is trying to assure its users that it has a strict no logging policy. This is probably the result of the stink many users raise after some VPN companies released user logs to authorities some time back.

For a company that is involved in providing security and privacy services, this kind of trust violation is the cardinal sin. We’re not yet sure how Thunder VPN will hold up against authority pressure, but let’s consider a few things.

Thunder VPN claims to collect no logs and yet it also in the same policy document says it might collect some information (quite a lot of information actually). Reading between the lines, it doesn’t log browsing traffic – which is meaningless.

VPN users want anonymity – meaning our identities shielded. There’s no point in having a half-baked privacy policy to placate the masses if it doesn’t mesh with the true spirit of anonymity!

b. No company information

While we normally don’t give a hoot about where a company is based or comes from, with VPN providers it’s a different matter. Back to the matter above, it is more likely that a VPN company based in a highly regulated country like the US will cave to authority demands for information.

Thunder VPN offers little to no information about itself. For all you know, it could be run by the FBI out of Quantico.

4. Security and Encryption – Say What?

After anonymity comes security, which is related in a way to how good the encryption on the VPN connection is. Many VPN service providers will happily crow about their connection protocols and encryption, since that is what they use to assure users of security!

Take for example the recent announcements from NordVPN and IVPN about their moves with regard to the WireGuard protocol. This is one of the core pillars of a VPN and Thunder VPN avoids the topic completely. No word of protocols, no word of encryptions.

Even chunks of its description on the Google Play Store is lifted off the Internet and recycled. We shudder to think what else they recycle.

As far as access goes, this is one small bright spark in Thunder VPN. By connecting to their UK server, we were able to use the BBC iPlayer, which technically means that the geolocation spoofing works fine.

This might be useful if you’re just looking to get around regional blocks on some content sometimes. Yet keep in mind the slow speeds that it offers. You might be pulling your hair out by the time you’ve waited for those streams to finish buffering.

As for torrenting, seriously? Who’s going to torrent with a downlink speed THAT slow?

To be honest, we are shocked about the Thunder VPN modus operandi. Yes, it is true that people generally accept slightly lower standards for free services. We think free services should always be taken up with a hefty dose of scepticism, but that is a rant for another day.

There are simply too many unknowns and grey areas about Thunder VPN to make this a recommendable service. In other cases, perhaps, but where your security, privacy and anonymity is concerned on the Internet, no.

When it comes to a VPN service, much more than the price, we urge you to consider a reputable service. There are many out there such as NordVPN which has frequent offers at prices that are practically unbeatable. Read our NordVPN review here.

One thought on “Thunder VPN Review: Dodgy and Slow!”